You can download it here, and if your device is unlocked you can run it 🙂

Maybe it will ever show up in the marketplace, but (according to microsoft’s policies) probably not… 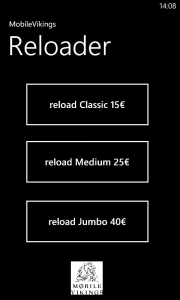 Andy was using the MobileVikings gadget and noticed yet another problem…

First he noticed that the number in the settings box wasn’t saved.

When these kinds of things happen, a programmer needs to know that it has something to do with classes mixing up…

My knowledge of javascript is rather limited, so I took a look on the internet.
Appearantly javascript is using absolutely no classes… Every variable is stored into a “var”. No matter if this is a string, an int, a byte, … So that was causing this issue…

So this needs to be changed!

Luckily Microsoft know about this problem, and provided a method called readString and writeString into their Sidebar API.

So after changing some code to these “string-aware” methods, this issue should be gone now 🙂

I’ve been playing a bit with a nice program called “Rainmeter“. It calls itself a “customizable resource meter“, but actually it’s a lot more 😀 It lets you control your desktop, and do almost anything with it.

Surplus! There are already tons of prefab skins out in the wild, so the most easiest thing you can do is download one of these, install it, and enjoy it’s power ^^

But ofc, we’re going to modify and enhance things a bit

It started when browsing the tweakers.net “huiskamer” (a place to chat about every random subject

) I found the show-offtopic about desktops, and saw a post made by EWK. He made a very nice skin with rainmeter based on this one by White-Baron from DA.

So I downloaded them, tested them, and they where indeed pretty nice. But the combination with my pretty colourful sidebar gadgets was a real visual piece of sh*t.

So I needed Rainmeter replacements for them 😎

So I started reverse engineering the existing .ini-files from the EWK skin 🙂
Learned some code using the rainmeter-documentation.

First of all, Rainmeter uses “Measures” and “Meters”. The measure calculates things, fetches information or invents things, and the meters write them to the screen.

For example: a WebParser, to scrape information of the internet. This was used to get information from the MobileVikings-api, and from the dommel.com website 😆

Next step is to create another measure, which takes information out of this array, and offer it to the meter.

This simply takes the information located in the 3th place of our array.

And then last step, our meter

Which is pretty straightforward. A name, go fetch a string, our variable from [MeasureSMS], some information about the location and the size of the text put on the desktop, and some fontinformation 😎

And kapow, our first information on the desktop appears

And another thingy that was done: the time was implemented in 0-12 hours instead of going to 23h like we’re used to in Belgium ^^ Just check the url.

In the end it’s just another measure using

for hours and minutes.

Download: MV parser, original skin from EWK . Should be placed in C:\Users\*insert username*\Documents\Rainmeter\Skins . the .ini-file in MV should be edited, using your own password and username 😉 Dommel parser on demand…
And the original from the original: SimpleSentence

Lol, power-noob-fail of mendel, at first I published my code from the MV-parser with my own password in it… In plaintext 😕 OOPS

My wonderfull GSM-provder Mobile Vikings is going public in juli: no need for invite codes anymore

So, anyway, if you want to become a mobile vikings, and you want to be sure of the current terms (which are realy great!), you should subscribe now 🙂

Which can be done with following invites 🙂

Feel free to use them when commenting on this blog-post