So, the first time I bricked a phone…
But at least I managed to fix it 🙂

And put some new software on it!

I’m still holding up with my two (!!!) years old mobile phone (also a record!).
A first gen WP, “fixed” with MAGLDR, running some weird beta version of the WP 7.8 update (the one with the image resize bug). My bluetooth wasn’t working. My storage was almost complete full.

Time had come for a fresh install 🙂

Installing wmdc, and the required samsung usb drivers didn’t really work on my Windows 8 machine…
DFT installer did find the phone, but crashed after a while with error “[Info]: USBWorkDWPI.cpp (423)”
Nevertheless, I tried to flash…

I should not have done that…

After some unfortunate try-outs, I was left with a device that only said “Samsung Omnia 7”

Luckily, a Windows 7 computer was not far away.
After reinstalling wmdc, samsung drivers and zune, the DFT tools where able to find my Omnia 7.

I tried to reinstall the MAGLD boot loader. And the installer actually finished with “success”.

But nothing happened…
Probably MAGLDR makes use of some system files for it’s usb connection? (not sure)
And the entire OS was corrupted, so nothing from the custom bootloader worked…

I decided to download a genuine Samsung firmware, flash it to the phone, and restart the entire process on the W7 computer.

A random samsung rom was flashed (just google one), MAGLDR was reinstalled, the previously mentioned firmware was flashed. And on top of this, from the same author as the rom, automode provided me for an radio firmware update for my Omnia7! Jeej!

So, my phone was up and running again with the newest rom on the market and its firmware flashed to the top!

But in the end, my bluetooth still doesn’t work 😦

When electronics become slow, unstable, or just boring, you can (mostly) upgrade them.

If your computer is getting slow you can buy a new cpu.
When you laptop has a shortage on storage space, you buy a new hard disk. Same with soundcards, RAM, and others. 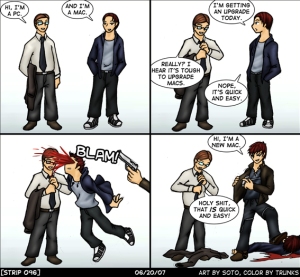 Anyhow, my old & trusty HP was getting rusty… (Not literally ofc ‘cause plastic can’t rust 🙄 )

So it was replaced 😀

Jeeaaaah, it’s a bit of an improvement

I went to Fnac, a multimedia shop, located here in Ghent. Played with several devices (including some high-end android and even symbian)… But WP7 popped out. It’s animations are incredible fluent, wonderful eye-candy, and it just works. A lot of things are still missing: like for example the copy-paste functionality, and a skype client. But I’m sure (call my naïve) they will become available in the next few months… 😎
And something I noticed on android, sometimes frames are just skipped? The menu’s are just not THAT fluent, especially when I compared it with WP7… I didn’t had the chance to try the GalaxyS, and I don’t know what versions of android where installed on the devices I tried, but maybe some optimizations can be made… (Tried the high-end HTC’s though…)

Anyway, I’ve been playing with my omnia for a couple of days now, and I’m loving it… Everything is synchronized with hotmail, and my desktop computer. Google Android surely has the same functionality, but still…

Marketplace is something nice, the only close the entire platform as money in a safe… Damn, I hate that… Microsoft went “Apple-style”… Hopefully they’ll create something android like with next to the marketplace, the apk-installable files 😀

Pictures aren’t that bad, at least they don’t “move” like my previous cellphone…

The biggest issue is ofcourse the battery. I play with that cellphone all day long… But you can’t do that without charging it… When you do nothing with the device, you’ll probably make it trough the day… Maybe I need to find some energy saving tricks ^^
Now, after some days, I noticed that it’s perfectly doable to make it trough the day… Which wasn’t always possible with my hp… But the hp was continuously syncing with hotmail, the samsung only each 30 minutes (which IS a pretty huge difference…)

The list of negative arguments will probably grow in the future, but for now it’s a great device

Atm only the lack of copy/paste 😐 (I notice I used that quite a lot, even on a telephone 😀 )